Gardening with Your Dog and For Your Dog. 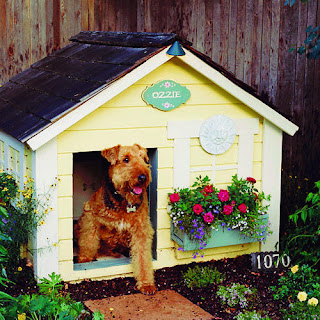 Spring Has Sprung! It's that time of the year to dream, design and plant. How many times have you tended to your garden with your best furry friend laying close to you watching as you dig, plant and nurture? Dogs love the outdoors, dogs love you and dogs love digging! Let's look at some ideas for gardens for dogs. We'll look at dog friendly plants, vegetable gardens for dogs and planting to keep pets safe.


There are gardens throughout the world where dogs and their owners share the outdoor space. It doesn’t matter if your garden is large or small yard or patio container plants, gardening is a fun time to spend with your pet. My Mom and I used to garden all of the time when I was earthbound. Now I supervise her from the Bridge and she hears me! 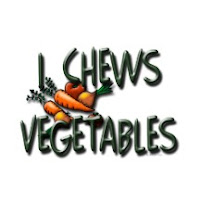 Our friends at American Dog Magazine present us with some of the veggies us dogs love. Plant a dog friendly veggie garden!

Garden plants toxic to dogs from the site DogsInTheGarden.com.

Happy Spring. Enjoy your time planting with your furry family member and post your pics!

This is a feel good story from our friends at Life With Dogs. 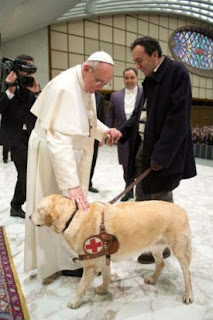 Journalist Alessandria Forlani wasn’t sure he’d even be allowed in when the new pope met with the world media on Saturday. Guards had told him he most likely wouldn’t because of his guide dog, however Vatican officials let him and his guide dog Asia in and after the pope’s thank you speech to the media Pope Francis asked to meet Forlani and Asia.
Forlani is a visually impaired radio journalist and showed up on Saturday at the Vatican’s auditorium for Pope Francis’ address to the media. Accompanying him was his guide dog, a yellow Labrador Retriever named Asia. “As I waited in line to enter the hall, the security guards told me that most likely I wouldn’t be allowed to get in with the dog,” Forlani wrote on his Facebook page. “But after a few minutes, Vatican official gave me the green light and I was accompanied by a Swiss guard to the audience hall.” Forlani and Asia were given a seat in the front rows.
To read the rest of the story click here.
Posted by Reba Messina at 4:35 PM 3 comments

Want to Introduce You and Your Dog to a New Adventure in 2013?

Let’s face it all dogs cannot be agility dogs. All dogs cannot learn how to drive a car. All dogs cannot teach kids to talk. Canines come in a lot of different packages and they have different personalities and purposes in life. Dogs with energy levels that go through the roof might make terrific agility dogs as they need a lot of exercise. Documented smart breeds like Border Collies just might pass the SPCA driving course. Then there are dogs, maybe mutts, who have Zen personalities and value a lot of quiet attention like Reba Messina did. I often thought she had a gift to be a therapy dog b/c she loved people and had a very sweet persona but I never took the time to look into it.

Maybe you’ve given some thought to your dog visiting children in hospitals or the elderly in nursing homes. Therapy dogs provide a lot of love, licks and joy during their visits. So I decided that I wanted to look into how to make that happen because I am going to find another Zen dog like Reba was to share my life with one day so that we can provide some happiness to others. Here are some tips on becoming a therapy team.
Could Your Dog Become a Therapy Dog?
Short answer:  To qualify, your dog must be friendly, well-behaved, and at least one year old. Observe how your dog acts around strangers. “Is he confident and eager to be petted? Those are signs that he’d be a good therapy dog.”
Pet Partners offers a 12-hour course on how to handle your dog in various settings, such as working with people who are in wheelchairs, have IV lines, or other medical equipment. After you and your dog pass a 22-part evaluation, Pet Partners will match you with volunteer opportunities at local schools, hospitals, or libraries that fit your pet’s talents. 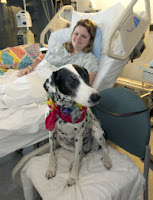 In addition to basic obedience, a therapy dog must react positively with handling by strangers and new stimuli. According to Petfinder, there are many things in a hospital room, nursing home room or even a homebound person’s home that could be new to the dog, and it must not react to people and things in a negative manner.

Furthermore, most classes will make sure dogs are familiar with hospital equipment and that the dogs are properly socialized. This means that the dogs must get along with people and other animals. When visiting a hospital, strangers constantly walk in and out of rooms; and hallways are often hectic, especially if there is an emergency. Socialization teaches dogs not to fear people rushing around with equipment such as machinery and hospital beds.

Canines also learn the art of networking. Included in their training are meet and greet exercises, as most people in the facilities you visit will want to interact with your dog. Role playing for a hospital environment also teaches dogs not to fear the equipment and hurried actions often found in a hospital environment. The dogs’ handlers are also instructed on safe dog-handling; thus, should something happen in a hospital environment, the handler knows how to react to the situation. A calm handler means that the dog has a better chance of staying calm.

As I was looking down to see what my mom, Linda Messina, was doing to prepare for the Christmas holiday I saw a HUGE storm roaring across the country. I checked on my earthly friends from California to the East Coast and I saw too much snow, too much wind, too much rain too too much!

Then I thought about how busy our humans are with the weather, traveling, wrapping presents, baking and all the things they do to make the house smell soooooooo good. They might not think about some very important things . . . like The Hidden Hazzards of Winter for us furbabies. So, thanks to Adopt A Pet here are 5 hidden hazzards you might have overlooked.

So take a quick look and I'm sending loving Christmas wishes for a safe holiday to you all!

You might have seen the news world abuzz about dogs driving cars this week. No, this isn’t a hoax from the Onion. Dog trainers in New Zealand have been working with shelter dogs, teaching them the motor skills of driving a car. While the New York Times and David Letterman are poking fun at the idea of mutts behind the wheel, the real story here is on the intelligence of dogs, how training advances their skills and why mutts from the shelter are great for the home.


Trainers with the Auckland SPCA have successfully taught three dogs, all shelter mutts, to drive a car on a closed course. But this isn’t meant to be a triumph of dogs using technology. Instead, the Auckland SPCA hopes to send potential adopters a message about shelter dogs. They are not second rate pets but wonderful animals capable of bringing joy and love to any family.

"I think sometimes people think because they're getting an animal that's been abandoned that somehow it's a second-class animal," said SPCA Auckland CEO Christine Kalin.


As the New Zealand Herald reports, Christine Kalin, points out the intelligence of these animals and the success of consistent dog training. “Driving a car actively demonstrates to potential rescue dog adopters that you can teach an old dog new tricks. The dogs have achieved amazing things in eight short weeks of training, which really shows with the right environment just how much potential all dogs from the SPCA have as family pets” she stated.

These rescue dogs, Monty, Ginger and Porter, prove that shelter mutts can not only make great additions to the family but have the intelligence to be used in the health field or as therapy dogs. If shelter mutts can drive a car, then they can do anything.

While rescues, mutts like me and senior dogs sometimes get a bad rap from the public’s misconceptions, with a warm environment and a lot of love they are capable of incredible feats. This amazing story highlights both the success of hardworking trainers and the full potential of shelter dogs. Perhaps if more news outlets focused on the achievement of the SPCA instead of poking fun at dogs driving cars, people would have a better understanding more respect for mutts and shelter dogs.

So as you go through your day to day activities and you see a ‘student driver’ car in front of you, check it out to see if the student is human or canine!

In steps the ASPCA. The organization negotiated a lease at $20,000 per month for provide a temporary home, a 20,000-square-foot emergency boarding center that opened over the weekend in a vacant warehouse in Ocean Hill, Brooklyn for family pets.

Run with affectionate precision by a team of disaster specialists from the American Society for the Prevention of Cruelty to Animals, the shelter housed 137 animals by Sunday evening and was expected to house a few hundred, if not more, before the week was out. The center can accommodate up to 700 animals, which are permitted to stay for 30 days free of charge, with full veterinary care, until their owners can reclaim them. The stories of families and pets bouncing from home to home putting greater stressors in their lives is heartbreaking. Mutts and cats don't understand what is going on so the stress is overwhelming to them

My Trip to the Rainbow Bridge - When Does an Owner Know When It's Time? 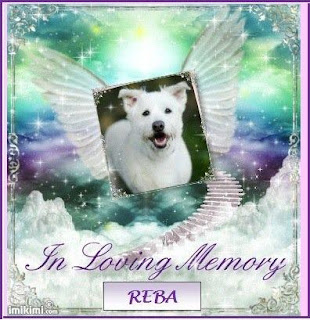 On Thursday 11/8/12 I went to the Rainbow Bridge. I had a wonderful year. I spent the summer at the ocean and I had recently celebrated my 17th birthday yet I had also started losing my ability to walk well, had lost sight in one eye and stopped drinking and eating as much as I used to. So a couple of weeks ago I asked my Mommy, Linda Messina, to help me transition peacefully onto my next journey and she did.

A lot of pet parents ask how you know when it's time to put a pet to sleep. Well there is a look we give you and then you just know. 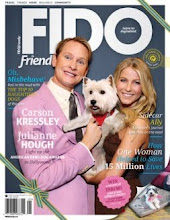 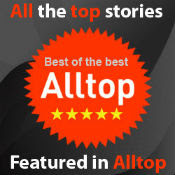 Reba Messina
DC and Ocean City NJ, United States
My mission in life is to Unite, Elevate and Celebrate Mutts! I've even created a 'breed' for mutts, The GenChan®. A humorous acronym for the genetically challenged dog! Get your GenChan® papers. Ask me how. Our Mission: To Unite Elevate and Celebrate MUTTS is and will be accomplished in many ways. We support and encourage canine rescue organizations and shelters across the country. 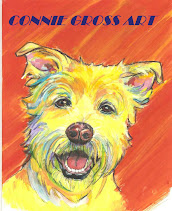 Click on picture to connect to Connie Gross Art 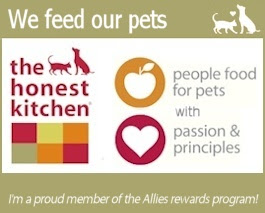